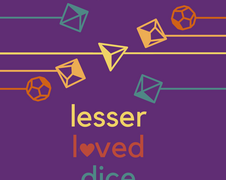 This is a submission to Lesser Loved Dice TTRPG Jam

View the submission page for this entry

You and your friends have just survived a horrible accident that killed TONS of people. It sucks for them, but hey, at least you’re alive! Unfortunately, Death is seriously pissed, and will do whatever it takes to balance his books. Your only hope for survival? Kill somebody else, add their lifespan to yours, and hope beyond hope you don’t fuck up and die. Get through the day, plan during the nights, and try not to reach the END OF THE LINE.

End of the Line is a one-page game for 2-5 players in the vein of the Final Destination movies, where thin caricatures of people must try to survive mundane tasks without dying gruesomely. It uses a d4 based system called BAD TIME DICE, escalating the risk of death every time a roll is failed. Usually, that would be a bad thing, but in END OF THE LINE part of the fun is seeing your characters die in terrible ways!

End of the Line: Slasher Edition takes the original system and transports it into a game of kill or be killed between obnoxious characters on vacation and a killer who's up to here with their antics! Same label, same dice, new gameplay!

End of the Line: True Crime Edition sees players take on the role of podcasters, looking to strike it big by investigating an unsolved crime. Will you suss out the secrets behind it, or will you fall flat on your face?

Proofreading and edits on this game were courtesy of J. Madamba!

End of the Line is now ROLE COMPATIBLE! The character sheet template is available here!

Now that we've completed the Itchfunding period, here's where I tell you what's happening for the future, in order to give you my expected timeline for work and fulfillment!

End of the Line has been featured on:

Though I'm very grateful to everybody who chips in to End of the Line, here are some especially big shoutouts!

In order to download this game you must purchase it at or above the minimum price of $3.50 USD. You will get access to the following files:

Support this game at or above a special price point to receive something exclusive.

If you buy the game at this price, I'll make sure to personally thank you on the End of the Line store page!

If you, you crazy sonuvagun, pay for End of the Line at this weighty price, not only do you get all of the benefits of the previous tiers, but you will ALSO be able to name the Bad Time Game mascot Shades Skull. PERMANENTLY. (Within reason I’m not taking anything homophobic, racist, ableist, etc.)

If you're having a bad time, take a free copy! The least I can do is help give you a couple of laughs. New copies are added when End of the Line gets a new rating, or someone makes a purchase!

If you buy End of the Line at this price, not only will I thank you on the store page, but you'll also be able to suggest one of the pregenerated characters that'll be released when we hit that stretch goal!

Such a fun game and I hope it gets the love it deserves! For a full review, head here: https://podofblunders.com/2021/10/08/end-of-the-line/

Thank you! I played the game for the first time yesterday. We had five players and in the end we had big problems with the Bad Time Mod in the Endgame. I think it makes sense to go down to 2 tests for "Getting Shit Done" in large playgroups 4+. What do you think?

So glad you were able to play! While this game’s intent is moreso “playing to lose” for narrative, you can absolutely reduce the number of tests for a larger playgroup to try and reach a win state!

Cute concept. Big fan of d4 of course, and I like the cumulative mod idea, it fits the theme here to a tea. Seems like a fun one.

It's always nice to see d4 fans! Too many people hate on it :(

i love this so much!! very clever system using a very underrated die, 4 out of 4

thank you for your love!! I hope more people come to appreciate the d4 one day ^^ 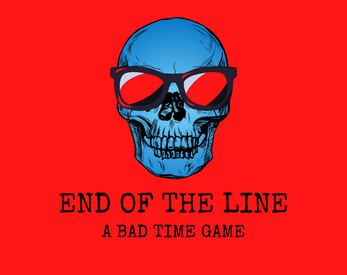