Aeruth was once a land of wonder, a place where none knew hunger or poverty or fear. A happy place, where no one wanted for anything. And yet, there were those that wanted. Those that yearned to have more. None could say for certain how greed curled its way around the heart of the people who had what they wished. Whatever the cause may have been, the fact was that those who took from others soon began to take from the land itself.

As man took from the land, the Gods who had built and preserved it watched. Waited. Observed, to see if they would turn back from their path of destruction. Finally, after centuries of deliberation and the slow, aching death of the world, they passed their judgment. The land that had been exploited fought back, bringing death and destruction upon humanity. Millions were lost to the flames that ate through steel and brick mercilessly, to the floods that capsized even the sturdiest ships, to the earthquakes that felled mighty bridges and thunderstorms that smote the tallest of towers.

Even now, the fury of the Gods remains unabated. Only an impassioned plea to the divine will quell their anger, but the voices of mankind cannot be heard when shouted from the land below. 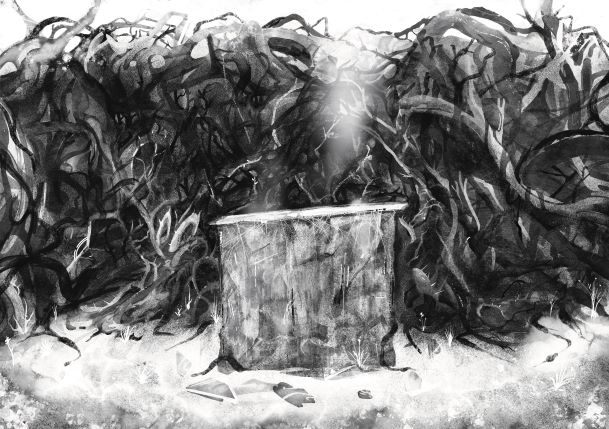 A stone altar, protecting a gate of thorns. Art by Tony Tran.

MORIAH is a simple role-playing game of ordinary people facing the extraordinary. It is a game of sacrifice, where people living quiet lives at the base of a holy mountain must attempt to ascend it in order to ask for the mercy of the gods. It is a meditation on what it means to give for others, inspired by LISA, Soul Sacrifice, and Blessed Messiah and the Tower of AI.

You can contact myself, Kyle T., for a link to the Moriah Press Kit!

PLAY THIS GAME FOR: 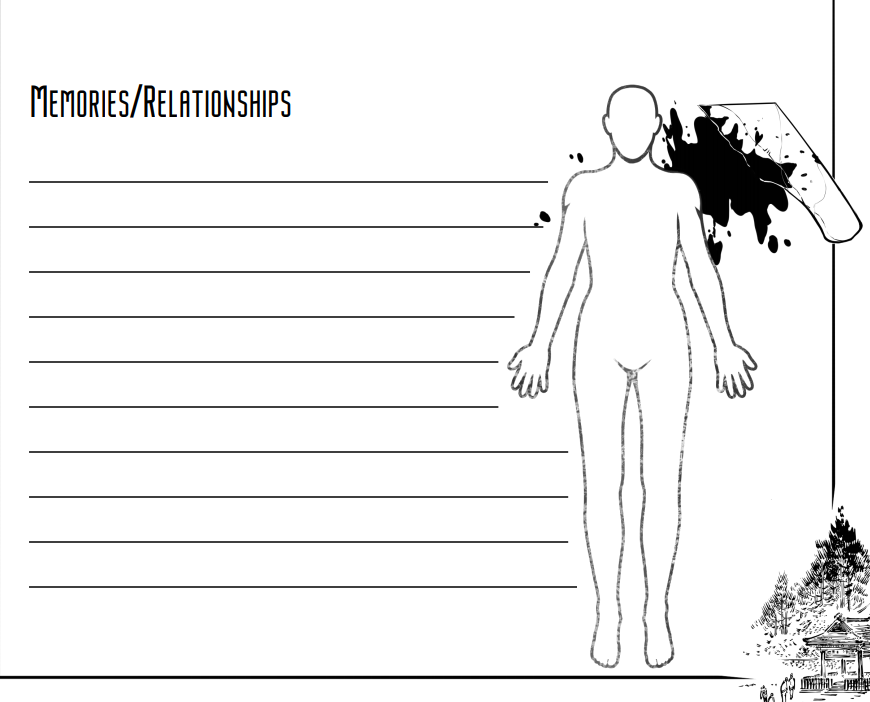 THE ASHCAN CONTAINS THE FOLLOWING:

THE FULL PDF CONTAINS THE FOLLOWING:

What People Have Been Saying

Mt. Moriah is a hungry beast. The sacrifice of your character’s body, community, and mind will undertake to Mount the World is a terrible price. However, even the ultimate sacrifice is not the end. Hopefully one of you will make it down the Road to plead for the survival of the World. If you do, I thank you. You are far stronger than I.

Beautifully written and brutal in its execution, Moriah commands attention with the authority of jilted gods

Moriah is beautiful, evocative, and tragic. It is a game about doom, but it doesn’t hide that fact from the very start. Instead, it asks the players again and again how much they’re willing to give and gives them the opportunity to push forward or walk away. It is a gorgeous game that I would bring to any group willing to talk honestly about hope, sacrifice, and vulnerability.

Moriah is a game of sacrifice, that will grab your soul and drag it on a journey through a decadent world. It's one of the most intimate games I found, and I cannot wait to bring my players on a journey where we'll face our darkest, hidden, and obscure part, answering the question: what are we willing to sacrifice to ascend Mt. Moriah and save the mankind?

Moriah asks you to reflect on its mechanics in a deeply engaging way. Even the type of die you roll is given meaning."

When we traverse MORIAH, we inhabit a sunless and brutal parable of sacrifice and resilience.  We say goodbye to our reliable relationships, goodbye to our foundational memories, goodbye to our useful limbs.  We consider the allure of quiet return to normalcy, and the festering regret that always accompanies such a move. We look back as we push forward, and come to understand that we are attrition embodied.

A game of MORIAH, like the mountain itself, is a bold and scraggy journey.  Like the myths and folktales it references, stories of MORIAH will be long remembered and retold by players who travel down its road.

Recommended Campaigns to Back

In order to download this game you must purchase it at or above the minimum price of $10 USD. You will get access to the following files:

Support this game at or above a special price point to receive something exclusive.

In times of sorrow, all we have is faith. You may claim this copy if you are in need, if you are in pain, if you want some form of solace. Every new purchase adds an additional copy.

Access to the full PDF and all stretch goals and content. Your name will be included in the Acknowledgments of the game at this tier.

Access to the full PDF and all stretch goals and content. You will receive a download code for any two of my other paid games as of this release. This includes:

Your name will be included in the Acknowledgments of the game at this tier.

Access to the full PDF and all stretch goals and content. You will be able to submit a suggested Challenge (pending review) for a special Backer Road tentatively titled the Road of Shattered Dreams. Your name will be included in the Acknowledgments of the game at this tier.

Access to the full PDF and all stretch goals and content. You will be able to submit a suggested Place of Respite and rest prompts (pending review) for a special Backer Road tentatively titled the Road of Shattered Dreams. Your name will be included in the Acknowledgments of the game at this tier.

Access to the full PDF and all stretch goals and content. I will run a session of MORIAH or one of my other games for you and your group for up to 3 hours (scheduling required, with advanced notice I am in GMT+8). Your name will be included in the Acknowledgments of the game at this tier.

The Deity In The Machine

Access to the full PDF and all stretch goals and content. I will sing a cover of Blessed Messiah and the Tower of Ai or one other Vocaloid song of your choice and send it to you. It will not be shared with the general public unless you allow it to be shared. Your name will be included in the Acknowledgments of the game at this tier.

I was finally able to play this with a group online.  As soon as i start playing I based it on the tower of AI song.  The messiah is a teenage princess from a small country in between bigger nations. Those who climb to the top gain a wish. I play the game with the theme of "is humanity worth saving if they are willing to sacrifice a defenseless girl?" A great game about sacrifice and how much you are willing to lose to fulfill the desire or ambition of others. It can come in many flavors.

Looking through this and it looks fantastic! Just out of curiosity, are there rules for solo play or is this only for multiplayer?

At the moment not, but I’d like to make some in the future!

Moriah is an RPG about sacrifice and redemption. You play as townfolks living at the base of a holy mountain, and the gods have unleashed their wrath. Can you make the perilous journey to ascend the mountain and ask for the gods' mercy?

Thank you! I hope you enjoy reading and playing ^^

Beautifully narrated, and brutal to read, Moriahforces players to examine the world they inhabit and the bonds they share, and ask what they’d give to save them. 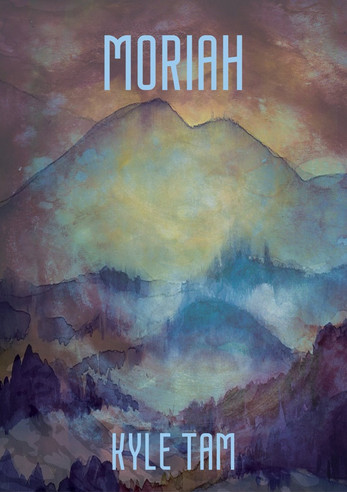 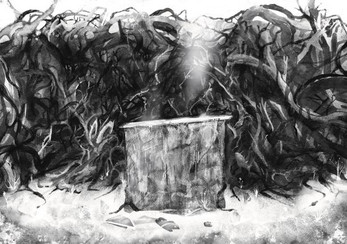 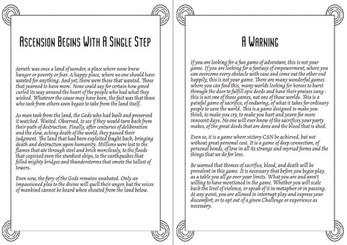 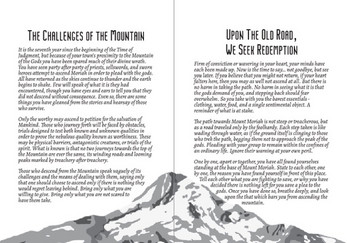 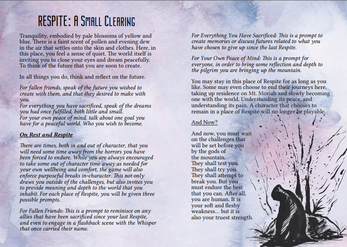 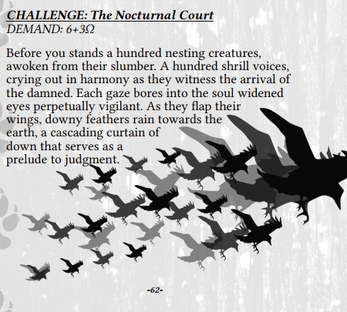 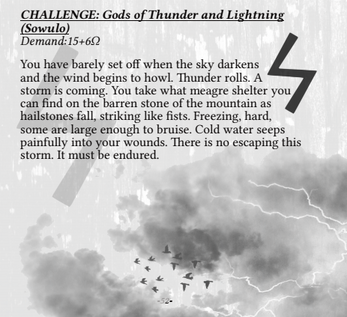 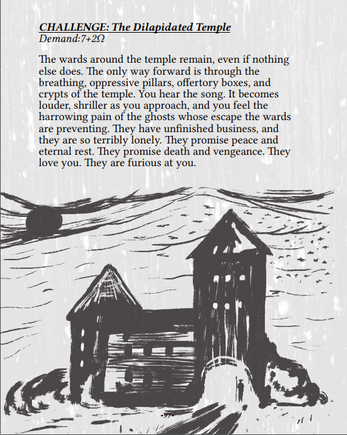